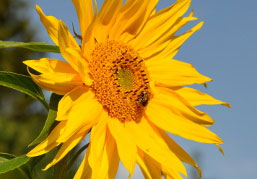 The sun’s energy output per day is 2850 times the energy demand of the whole world. This shows that solar energy resources are vast and the sun will be at our disposal for a very, very long time. Some estimations talk about another five billion years.
Photovoltaic makes an enormous amount of energy available to us.
These are the advantages of solar energy:

This is why the WIMEX-group offers free areas and rooftops to companies so that they can build ecological solar power plants and make environmentally friendly energy without carbon emissions.
At present we have well over 51 acres covered with solar panels. Local operators add the energy to the supply networks and our solar energy covers the yearly demand of about 5200 four person-households This saves about 29 tons of CO2 compared to fossil fuels.
Apart from the company-owned rooftops, the WIMEX-group also makes free areas like the old military airbase in the town of Köthen usable. In the year 2008 the first plant, which covers about 130 acres, went on line. After continuous expansions of area 2 in 2008 and the landing strip in 2011/2012 the overall size is now of more than 450 acres and a peak performance of 67.5 MWp. A plant of this size can help save a yearly amount of about 38 million tons of CO2 compared with the use of fossil fuels and it can supply enough energy for an average of 15500 four person-households. This calculation already includes the carbon emissions caused by the production of solar panels.
In terms of numbers, the energy that is generated on the free areas and rooftops of the WIMEX-group exceeds the demand of the whole town of Köthen. At the same time it increases the value of an area that had never been used before, since mines and cluster bombs were some marks that the military past had left.